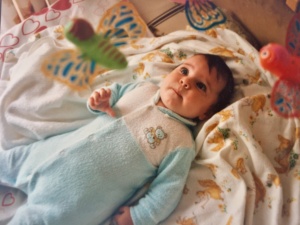 It’s not so much the looking up or down that caught my attention – so much as it is the memory of the bedding I’m lying on. A few years later (I must have been anywhere between 2-3), I placed a dead hoopoe bird, which was my favorite bird at the time, on that exact pillow. I remember very clearly (the image imprinted in my memory) picking the dead (and still warm) bird up from a flowerbed in our garden. The soil was moist, and there were some ants too, all stuck to the birds’ body.
I took the bird inside and washed him in the basin of our bathroom, and after I went to the bedroom to warm his cold body. I’d imagined I caused it, because of the bath. I will never forget this moment. I placed the bird on the centre of the pillow (surrounded by the red hearts printed on the pillowcase) and drew the matching duvet cover neatly over him so that only his head was visible. It was at this point that I turned my head and looked up, straight into my mom’s face that resembled a very mixed expression of something between shock, horror, disgust, and confusion.
She asked me what I was doing (her voice was a little nervous and unsettled, and the tone stuck with me to this day). I tried to explain what I was doing (in all my toddler-ness) to no avail. She half-sternly, half-gently replied that we couldn’t keep the bird in the house (most likely worried about disease, or whatever), saying that he was dead and that she will place him outside for ‘Jesus to collect’. It was here that I realized what death was. It wasn’t warm and fuzzy. It was cold and blunt – unforgiving. There was no ‘The End’, it was simply ‘the end’…
It wasn’t soft like the birds’ body when I picked him up. It was cold, unpleasant, stiff, and hard.
The send-off isn’t gentle, the funeral is always devastating.
Death was something sad, shocking, gruesome, and even horrific.
Not something you want in your home; in some way not even part of life. Something you kept outside.
It was like the circle broke there…. the cycle ended…
When I look at the photo now, I can see the baby me looking up in wonder at the full-of-life fat caterpillars turning into butterflies, but from the perspective of the adult, I see the butterflies at the end of their life cycle.
Instead of life, I am conditioned to see death*.
The ancient Chinese used to paint on silk, sourced from cultivated silkworms. Sericulture dates back to between 5000 – 3000 BC. The same worms we so love as pets when we are children were cultivated and manipulated through human’s demand for the precious fabric they produce. Once the silkworm spun its cocoon, the cocoons are boiled to obtain the silk, resulting in the killing of the silkworm pupa.
A harsh cutting of the circle/cycle (nature) with a straight line in the pursuit of higher profit margins, production as we know, running on another line – a timeline.
This practice is against the cardinal Hindu virtue of Ahimsa, that Mahatma Gandhi fought for so hard. ‘To cause no harm to all living beings’.These ancient paintings produced by the Chinese (also the place where silk originates from) were often found (and therefore placed) in tombs. They were made most often in a T-shape.
On the T-shaped painted silk garment, the uppermost horizontal section of the T represents heaven. The bottom of the vertical section of the T represents the underworld. The middle (the top of the vertical) represents earth.

Very much heaven and hell.
How we look up to God in heaven*
Up is associated with life and down with death.
We can even take that further and say we associate death with ‘bad’ and life with ‘good’.

The cardinal direction of North and South, no longer represent opposites such as male and female, they no longer balance. By the cutting of the circle with man-made straight lines resulting from virtues such as capitalism and greed, we have created an imbalance in the natural cycle.Instead of seeing these two things in harmony, man has cut through the circle creating a divide.

This brings me to Disney; dreams, and fantasy. How we view the world as a whole when we are little, and how this circle is cut with a line, made by a knife held by the hand of an adult caretaker. The blade is shaped and sharpened through biased life experiences most often riddled with trauma, resentment, sadness, and ancestral conditioning. How this makes us lose sight of the circle that represents the wholeness of existence/life. At what moment did we forget to look up at the Gods and the angels? When do we start looking down at the dead hoopoe?The Cinderella fountain at Disney Parks is a great example. From the adult perspective we see a pensive, unhappy young woman. But when children are looking up at her they see a smiling princess with a crown on her head. Walt Disney has cleverly designed many of the features of the park in this way.
Around the fountain are water fountains, placed just high enough that children can easily reach them, never losing sight of the smiling Cinderella wearing her crown. Adults on the other hand need to bow down to have a drink of water, and then only will they see the crown of the royal girl they mistaken for a sad girl in her rags they saw from their adult perspective. I love how the element(s), in this case: something as pure as water, and the primal need to quench a thirst, can indeed change one’s perspective by humbly bringing you to your knees. 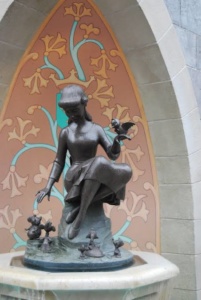 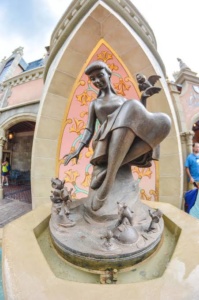 How a queen might be mistaken for a sad girl in rags by our own conditioned biased perspective and outlook.
It so beautifully ties in with the distorted appearance of each individual through the filters of social media.
How no amount of likes, filters, followers, or comments can count as an accurate representation by what to judge the smile or frown of the person we are presented with.
How social media does not function as a mirror, that it is not the person, but merely a photograph.
A gentle reminder to change our own perspective ever so often.
To become humbled and be humble.
To keep our faith by looking up and letting go of the blade in our own adult hands, mindfully, responsibly, and gently.

In a quest to protect the younger ones still looking up, our children and students.

A collection of thoughts, ideas, experiments, and work in progress. You can stay up to date by subscribing to my mailing list.