My first gallery based solo exhibition in Cape Town is around the corner.

The exhibition is titled: ‘I love you’ and will open on Valentine’s Day 2018.

To not get stuck on immediate stereotypes of love, I thought I should explain rather the symbolism behind the exhibition and my work. 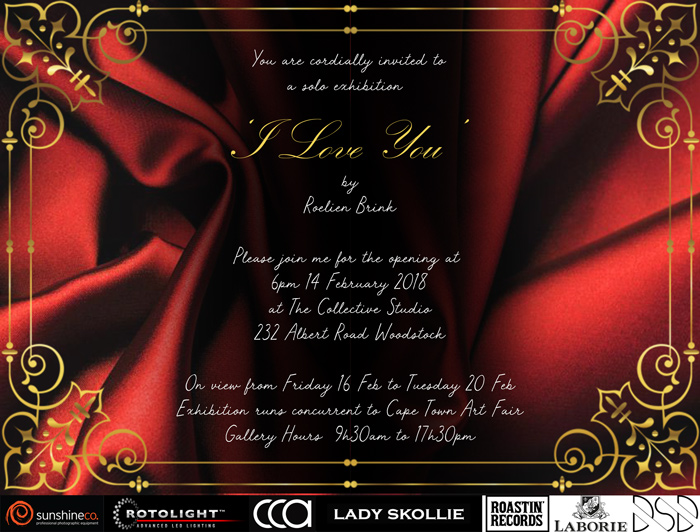 The artwork consisted of 34 letters I built from 184 wooden pallets.

The letters were on exhibition at Afrikaburn in the Karoo desert the same year.

The spelt out the lyrics to Eminem and Rihanna’s song ‘Love the way you lie’, reading: ‘JUST GONNA STAND THERE AND WATCH ME BURN?’ 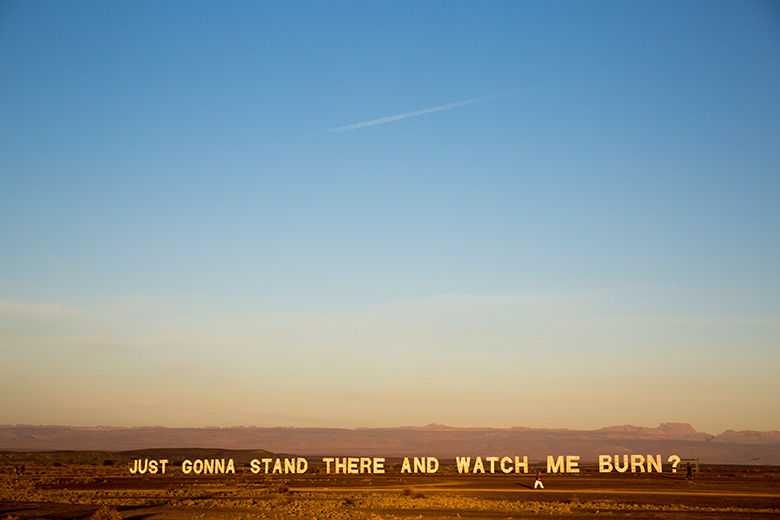 I have written about the artwork quite extensively.

The artwork was created in a time of immense change for me. The reason I am mentioning this, is about how the artwork came about, and what happened before and during the two weeks we spent in the desert constructing the final work.

To give you more context, I would like to start at the moment the trailers were packed and we were almost ready to depart to go set up Love the way you lie’.

Half my team was already en route to Afrikaburn with the artwork when I asked my team mate (also my partner at the time) if we could drop the jug at its owner.

Let me tell you about The Jug. We took the jug (without asking – I admit this with the deepest level of shame) from a studio party in quite a drunken state (understatement).

There was a swan on the jug that greatly intrigued me and drew me to it.

Needless to say, the party happened during the time of the building of ‘Love the way you lie’.

To me personally this was a very confusing stage of my life because of my recent divorce.

After taking the jug from the party I felt terrible (obviously).

The next day I decided the best thing would be to phone, apologize and return the jug.

It turned out the jug belonged to one of the artists.

She is a little older than me, and was not in the mood for my excuses.

She told me that the chaos that was my life was not her problem (rightfully so).

It was a beautiful jug with the swans painted on it, more importantly her mother used to pour them juice from the jug at birthday parties when she was a child.

She was so right, the chaos that was my life reflected in everything I did or didn’t do.

The damn jug sat with me for quite a while, haunting me daily. My life was absolute chaos. I was scattered, everywhere.

In the maddest rush I insisted against my partner’s will (and because my conscience have been driving me crazy over the jug at this point), to finally go drop the jug before leaving Cape Town for the Karoo.

Needless to say, my partner was not happy with this at all.

Adamant and hard headed as I can be, and as mad as my conscience drove me to this point, I got in the car and drove to where her studio was. It was not very far from our departure point.

At this stage, the anxiety and frustration was in abundance. It had been a real struggle getting all the 34 letters and two weeks’ worth of equipment on the trucks earlier that morning. We were all exhausted after months of building the letters for my artwork.

As I turned the car to drive into the road her studio is in to drop the jug, a speeding taxi Mini bus drove straight into us.

We were okay, but very rattled – and the jug broke.

I can’t remember much, just seeing my partner running into the road, glass everywhere.

All I remembered was the image of the broken swan.

It was such a blur from there on.

It was like I saw everything for the rest of the trip through the shattered glass of the swan.
I could not separate any of the rest of the experiences of installing the work or looking at it completely from this moment.

It was such a symbol of what my life has become at that stage.

All the way to the desert (in the broken car), after getting there a day too late because we got lost (and separated from the artwork) in the desert, the only thing I could think was how messy my life was and how this accident could have been fatal.

In a way looking back it was fatal.

Right in that moment of seeing the broken swan, my partner yelling anxiously as I looked up, I realized so much about love and life and the commitment we have to each other, promises that can turn into accidents.

How beautiful moments can be turned into living nightmares if one does not stay in control.
How I was completely out of control.

How my actions influence other people.

I built an artwork, he put his heartbreak aside to help me.

How my partner at the time must have felt dealing with my broken state, as I worked relentlessly to get the emotions out of my system. I had little to nothing to spare for anyone else.

I remember how I struggled to do what I love most, mothering.

On any other day and up until that point it was what I loved most, it came so naturally, and all of a sudden I just couldn’t hold it together.

I felt like I failed my three year old son.

Working relentlessly at building this artwork to gain some control was the only way I saw out of the situation.

I was thinking about how my ex-husband (obviously also hurt as hell) was letting me go build this artwork in the desert as he realised my pain and put it before his.

He was watching our beautiful son.

My mom came from far to help in the day when Rich (the ex-husband) had to work.

My mother realised my pain, even though she had faced much harder times than I have ever, in her own life.

The shattered swan was a warning in a way. Looking back, this was the loudest siren. It was ‘a swan song’, a silent, beautiful and sweet song, the swan sings as a warning before she dies.
It was a wakeup call.

Mythology tells us that ‘the swan song’ is often also described as the last act, final work, etc. of a person before his death.

Ironically my artwork was to be burned (and was burned) in the desert two weeks later.
In a way helping me make peace with a huge part of me that died.

The artwork burnt silently and gently.

The months of hard work fell to the ground in what felt like seconds.

In a way helping me make peace with a huge part of me that died.

The artwork burnt silently and gently.

The months of hard work fell to the ground in what felt like seconds. 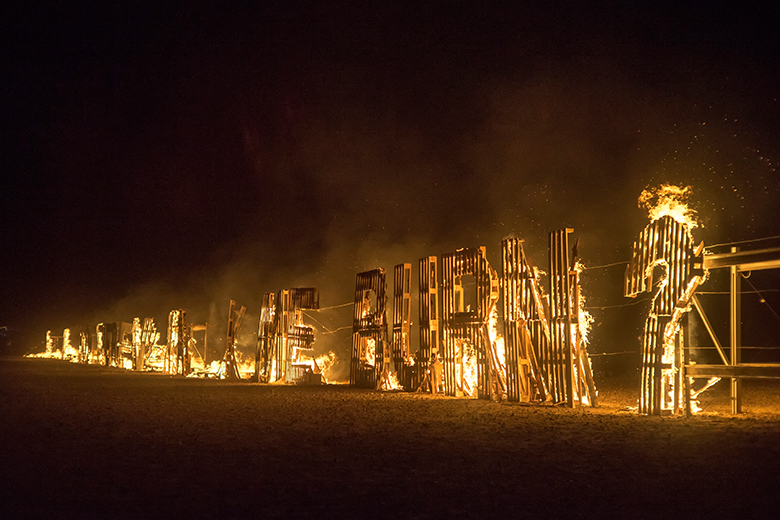 The swan is also seen as a symbol of ‘light’ because of its colour.

‘Love the way you lie’ was based on the Hollywood sign.

When illuminated it glowed hauntingly white at night, burning the question: ‘JUST GONNA STAND THERE AND WATCH ME BURN?’ into your eyes.

I couldn’t look at the horizon for long or too often during the festival. 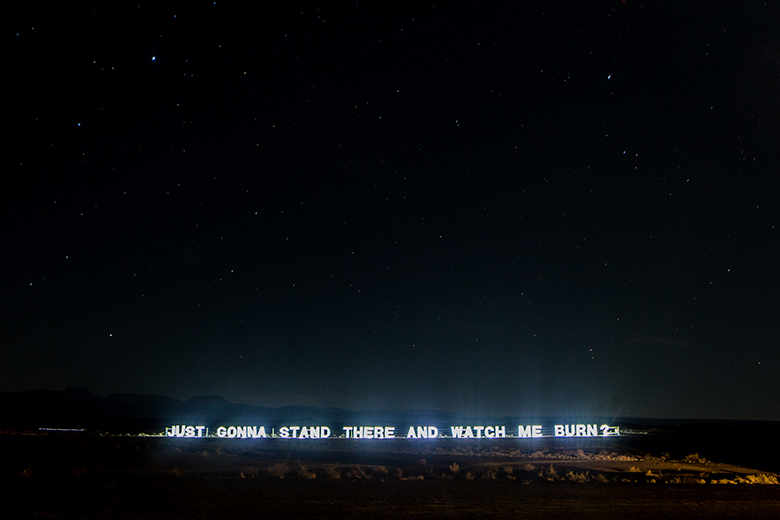 In Roman mythology the swan is sacred to Venus, the goddess of love.

As a feminine symbol, the swan is also associated with intuition and gracefulness.

The swan is also sometimes seen as a feminine symbol of the moon, and the moon in turn rules emotion. 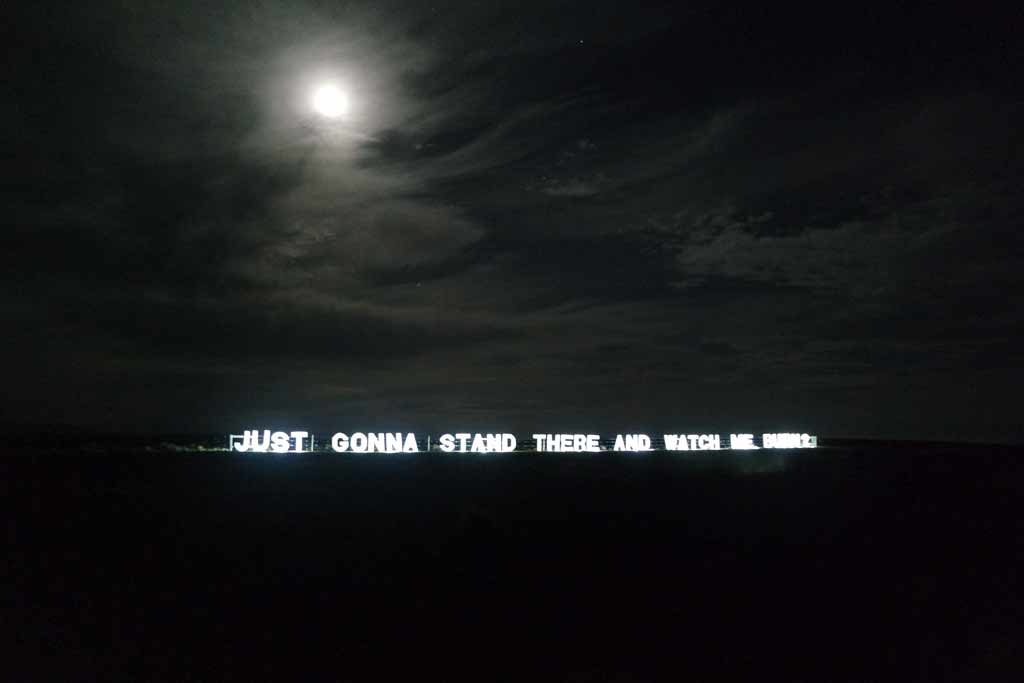 Swans are lastly often a symbol of love or fidelity cause of their long-lasting, apparently monogamous relationships.

They do not often ‘divorce’, but would only do so if one partner dies off, or if there is nesting failure.

As a dream symbol the swan can signify self-transformation, intuition, sensitivity and even the ‘soul’, ‘the higher self’ of a person.

With ‘I love you’, I want the viewer to see the exhibition through this symbolism.

I want the viewer to experience the works through the same pieces of shattered glass I did.

I want it to be a wakeup call.

A gentle, silent warning about love.

How fragile love is or can be, and how mainstream something so delicate can be treated till it reaches its own death in a society obsessed with material things, social media and consumerism.
The death of love.