During her third year of studies at WITS University Roelien’s classmates started to think about their careers- the names of many local, successful artists were mentioned. Although most of the class was female, the majority of the names mentioned were male. Kentridge’s name kept coming up. I wondered if my drawings would ever earn me “William Kentridge” status. That was when it struck me.

‘The artist formerly known as Roelien Brink legally changed her name to explore fame, the ‘value’ attached to to symbolism (i.e. names, brands) inflated by ideas of fame and celebrity. Issues such as art and the value of art, and the art brand are addressed, while the concept of originality and authenticity is challenged. 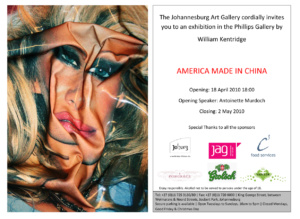 The Artist, William Kentridge, formerly known as Roelien Brink is exploring the notion of fame, celebrity, ‘cultural capital’ within a consumerist culture and its impact on art or more generally aesthetics. Through her name change she raised issues around fame, and cultural capital generally, particularly exploring the ‘value’ which attaches to symbols (abstract, i.e. names, brands) inflated by ideas of fame and celebrity, but as mere symbols really the value conferral becomes void and unsubstantiated.

In similar vein the artist wants to explore some of these issues further with current artworks that will be on display at the Johannesburg Art Gallery in an exhibition titled: America made in China opening on the 18 April 2010 at 6pm. Particularly, these works consider aesthetic ideals from within a consumerist and media saturated culture. Again the question of value is raised as advertising campaigns, idealise the beauty and youth of celebrities, arbitrarily using the individual to promote their products. As the question of value is central to art, whether aesthetic or otherwise, it is the key to be artist project to investigate how media distortion converse ever more value on mere symbols, be it through cultural capital in names and branding, or through fame and celebrity. The work forces the audience to see the groundless abyss upon which our value system is erected. 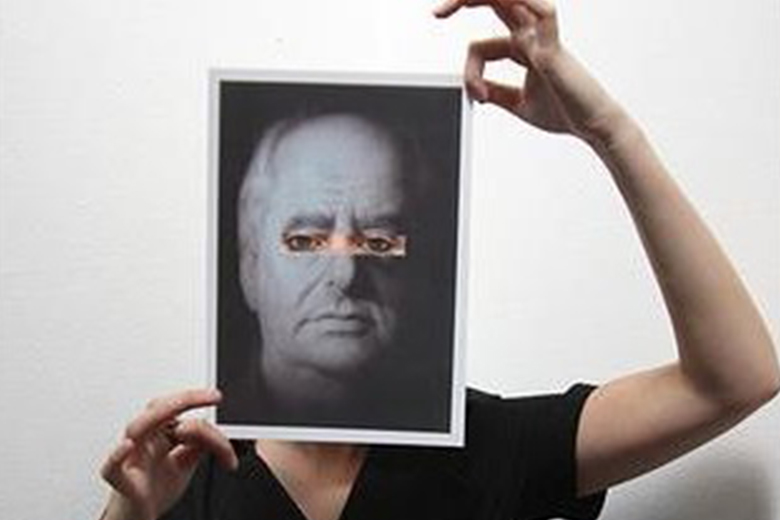 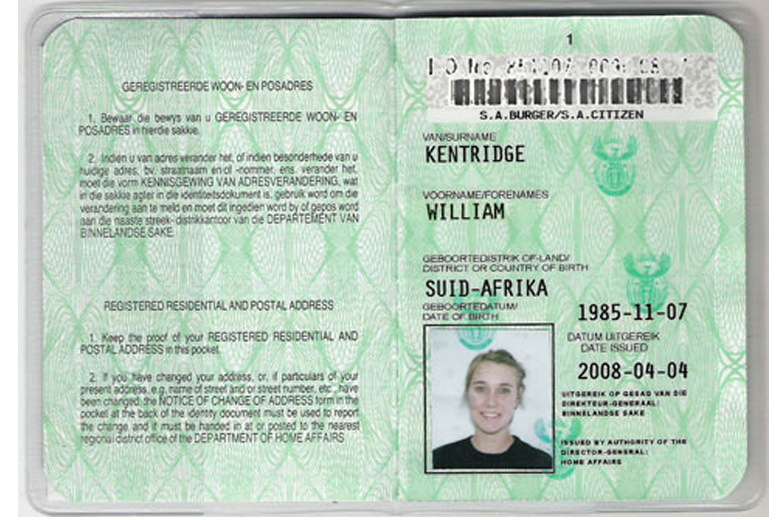 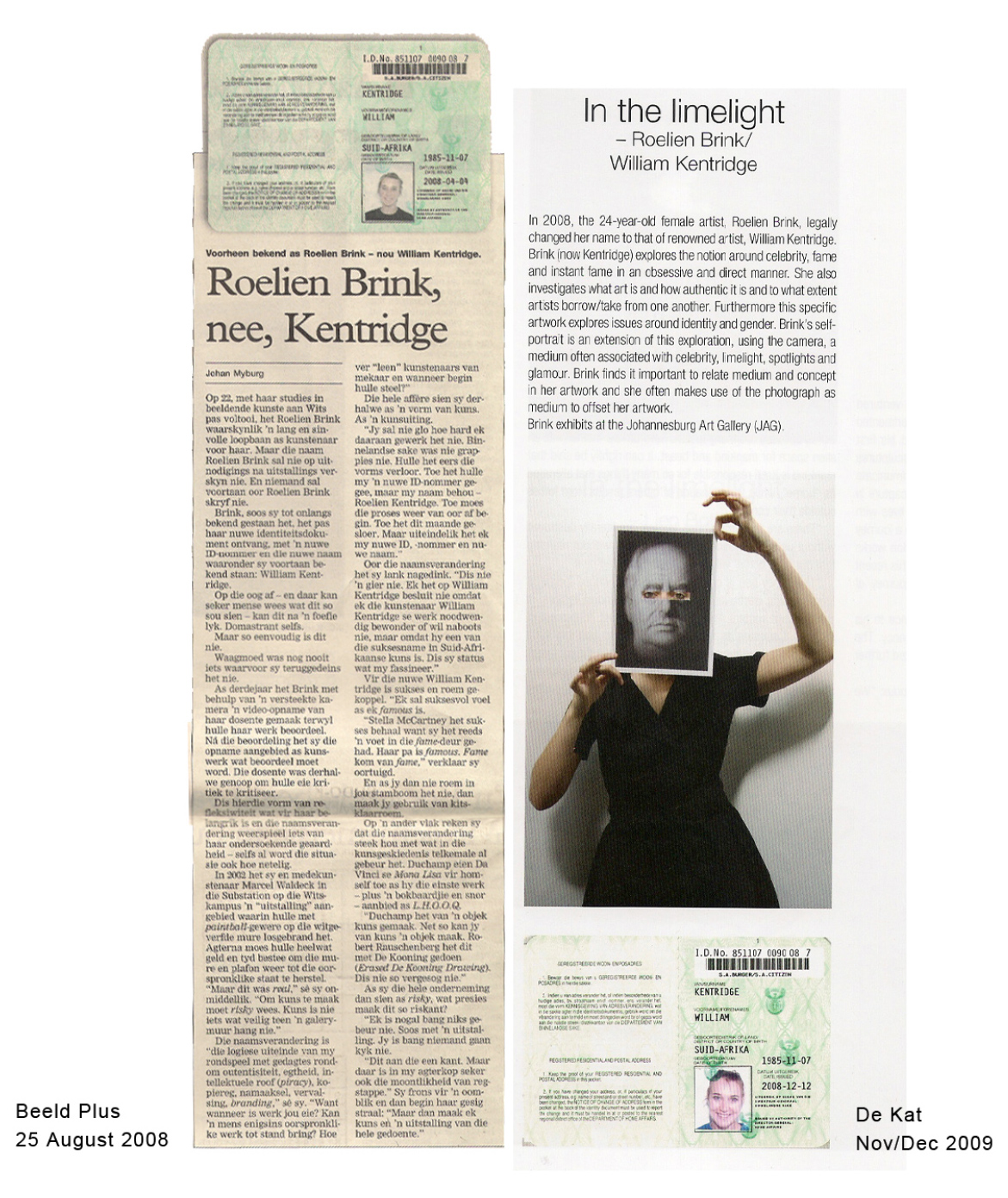 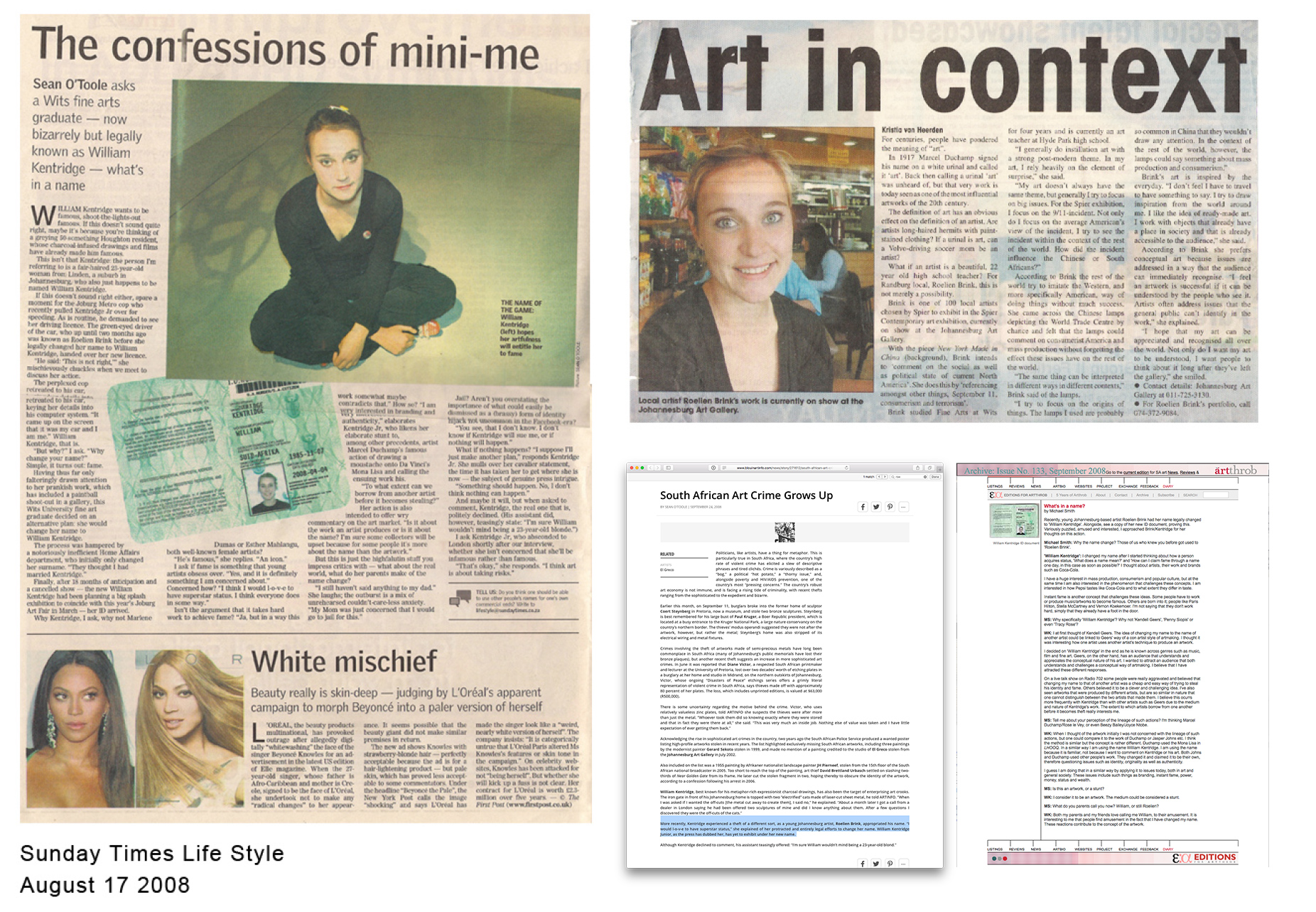 What’s in a name?
by Michael Smith, artthrob.co.za Archive: Issue No. 133, September 2008
Link to Artthrob Article

Recently, young Johannesburg-based artist Roelien Brink had her name legally changed to ‘William Kentridge’. Alongside, see a copy of her new ID document, proving this. Variously puzzled, amused and interested, I approached Brink/Kentridge for her thoughts on this action.

Michael Smith: Why the name change? Those of us who knew you before got used to ‘Roelien Brink’.

‘William Kentridge’: I changed my name after I started thinking about how a person acquires status, ‘What does a name mean?’ and ‘How can I claim fame through a name one day, in this case as soon as possible?’ I thought about artists, their work and brands such as Coca-Cola.

I have a huge interest in mass production, consumerism and popular culture, but at the same time I am also interested in the phenomenon that challenges these concepts. I am interested in how Pepsi tastes like Coca-Cola and to what extent they differ in taste.

Instant fame is another concept that challenges these ideas. Some people have to work or produce music/artworks to become famous. Others are born into it; people like Paris Hilton, Stella McCartney and Vernon Koekemoer. I’m not saying that they don’t work hard, simply that they already have a foot in the door.

MS: Why specifically ‘William Kentridge’? Why not ‘Kendell Geers’, ‘Penny Siopis’ or even ‘Tracy Rose’?

WK: I at first thought of Kendell Geers. The idea of changing my name to the name of another artist could be linked to Geers’ way of a con artist style of artmaking. I thought it was interesting how one artist uses another artist’s technique to produce an artwork.

I decided on ‘William Kentridge’ in the end as he is known across genres such as music, film and fine art. Geers, on the other hand, has an audience that understands and appreciates the conceptual nature of his art. I wanted to attract an audience that both understands and challenges a conceptual way of artmaking. I believe that I have attracted these different responses.

On a live talk show on Radio 702 some people were really aggravated and believed that changing my name to that of another artist was a cheap and easy way of trying to steal his identity and fame. Others believed it to be a clever and challenging idea. I’ve also seen artworks that were produced by different artists, but are so similar in nature that one cannot distinguish between the two artists that made them. I believe this ocurrs more frequently with Kentridge than with other artists such as Geers due to the medium and nature of Kentridge’s work. The extent to which artists borrow from one another before it becomes theft really interests me.

MS: Tell me about your perception of the lineage of such actions? I’m thinking Marcel Duchamp/Rose le Vey, or even Beezy Bailey/Joyce Ntobe.

WK: When I thought of the artwork initially I was not concerned with the lineage of such actions, but one could compare it to the work of Duchamp or Jasper Johns etc. I think the method is similar but the concept is rather different. Duchamp used the Mona Lisa in LHOOQ. In a similar way I am using the name William Kentridge. I am using the name because it is familiar, not because I want to comment on Kentridge or his art. Both Johns and Duchamp used other people’s work. They changed it and claimed it to be their own, therefore questioning issues such as identity, originality as well as authenticity.

I guess I am doing that in a similar way by applying it to issues today, both in art and general society. These issues include such things as branding, instant fame, power, money, status and wealth.

MS: Is this an artwork, or a stunt?

WK: I consider it to be an artwork. The medium could be considered a stunt.

MS: What do you parents call you now? William, or still Roelien?

WK: Both my parents and my friends love calling me William, to their amusement. It is interesting to me that people find amusement in the fact that I have changed my name. These reactions contribute to the concept of the artwork.

What’s in a name?
by Michael Smith, artthrob.co.za Archive: Issue No. 133, September 2008
Link to Artthrob Article