My #throwbackthursday for this week is a work I did in my third year of study at WITS School of the arts.

This was one of my favourite artworks I produced during my studies.

Funny enough CCV could only be produced during my studies, and is a direct comment of my view and experience of art and art criticism.

Here is a piece of writing explaining the artwork from an old catalogue:

This work was produced during an art crit (assessment) of the artist’s own work while the artist was studying at the Wits School of Arts. The artist set up a secret camera hidden in an alarm sensor. The lecturers and students partaking in criticizing the work were secretly recorded from outside the building. After the crit/assessment was conducted the participants were told about the recording, and it was played back to the audience, while yet another recording was made of this ordeal. The lecturers were now forced to view the recording as an independent work and offer their criticism. Thus involving them in a critique of their own crit, and a consequent viewing thereof when the new recording was played back to them (the recordings kept being rotated). In this work the artist questions the validity of art criticism, particularly in an ‘art-institution’, and to what extent art allows of being assessed in such a formal manner. It further explores how a work might be perceived originally as compared to mediately.

The Camera was hidden in this alarm sensor 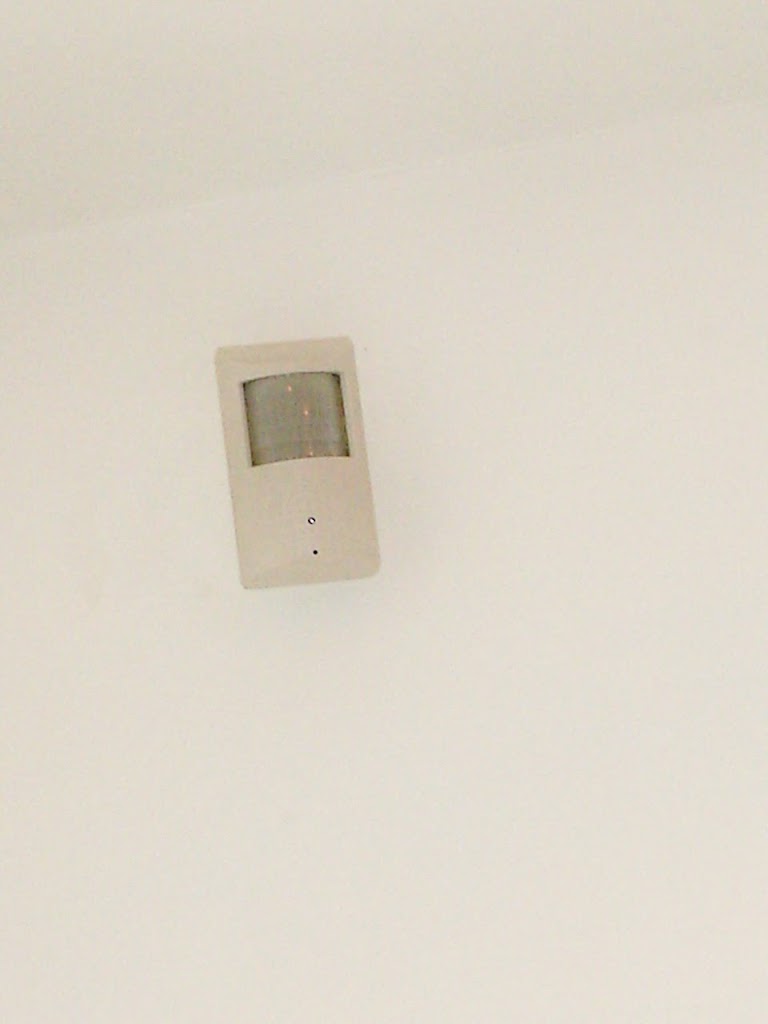 The recorder set-up outside the back of the office with Marcel Waldeck (amazing artist) doing the recording for me. 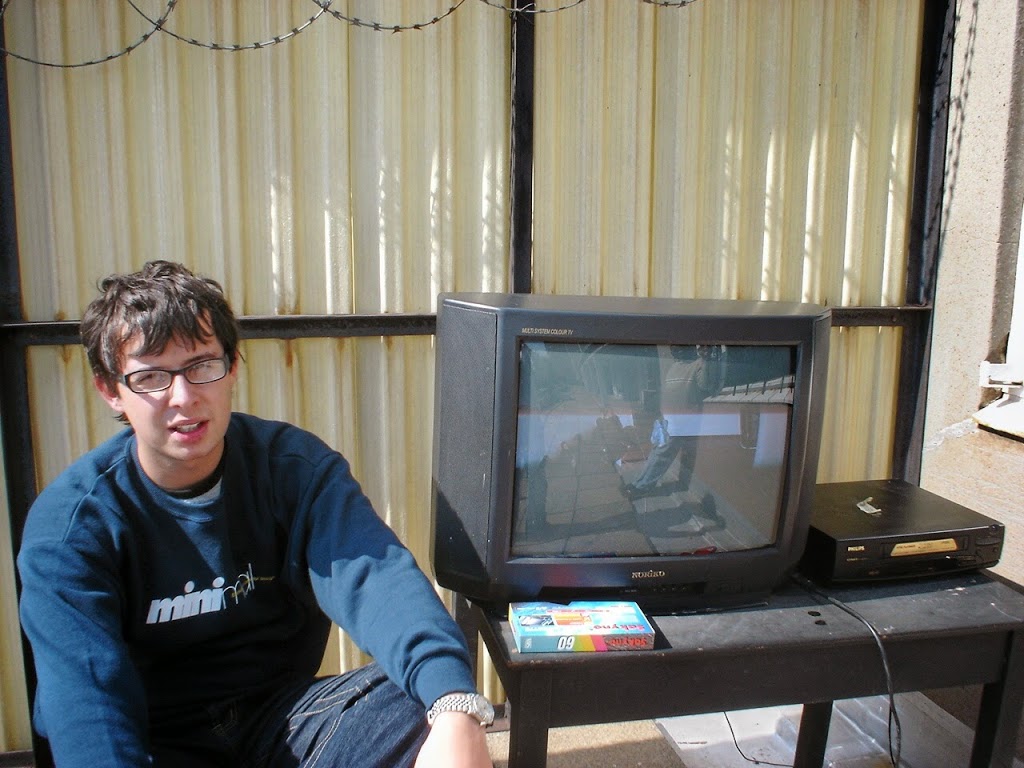 Stills extracted from the recorded footage 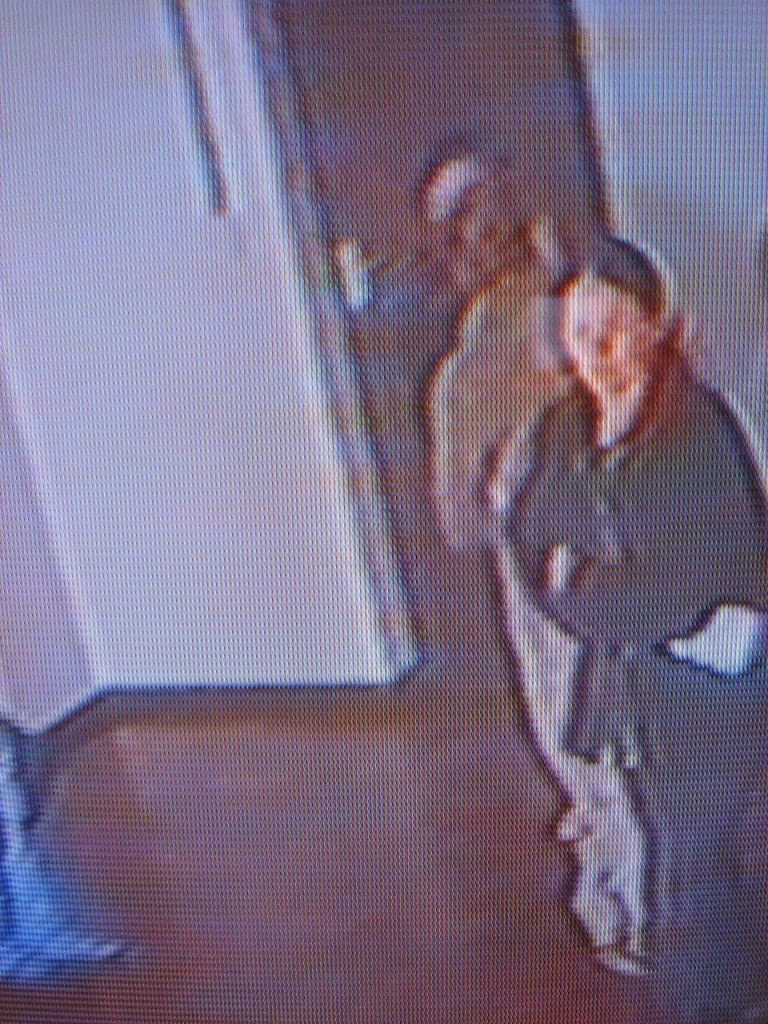 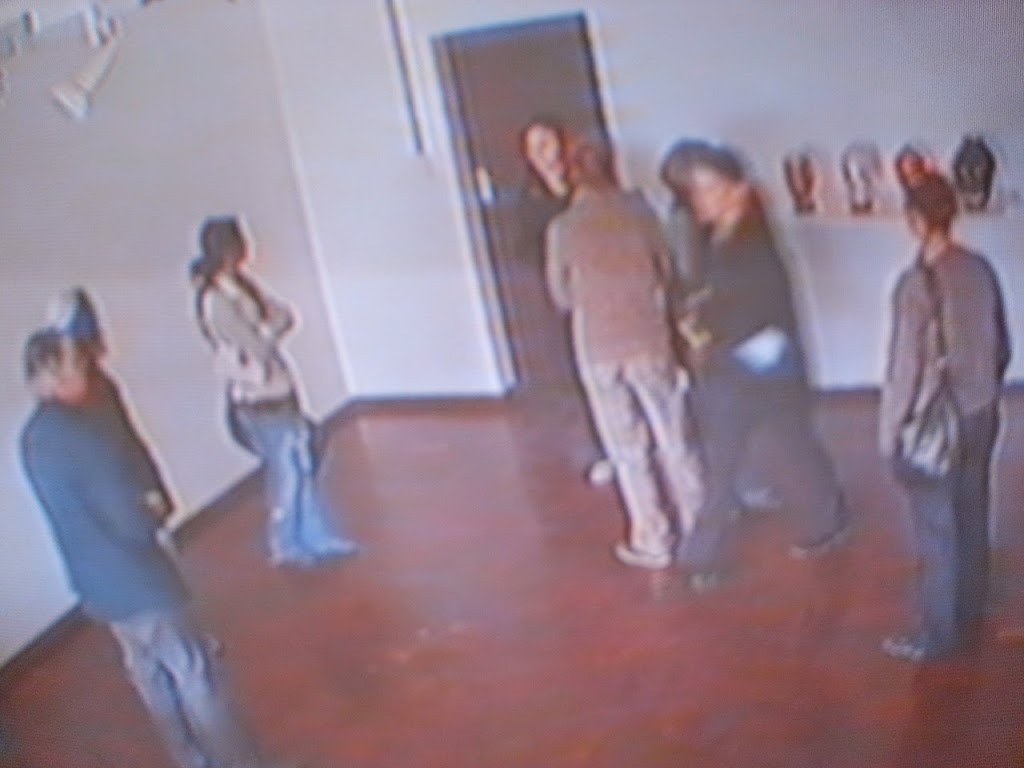 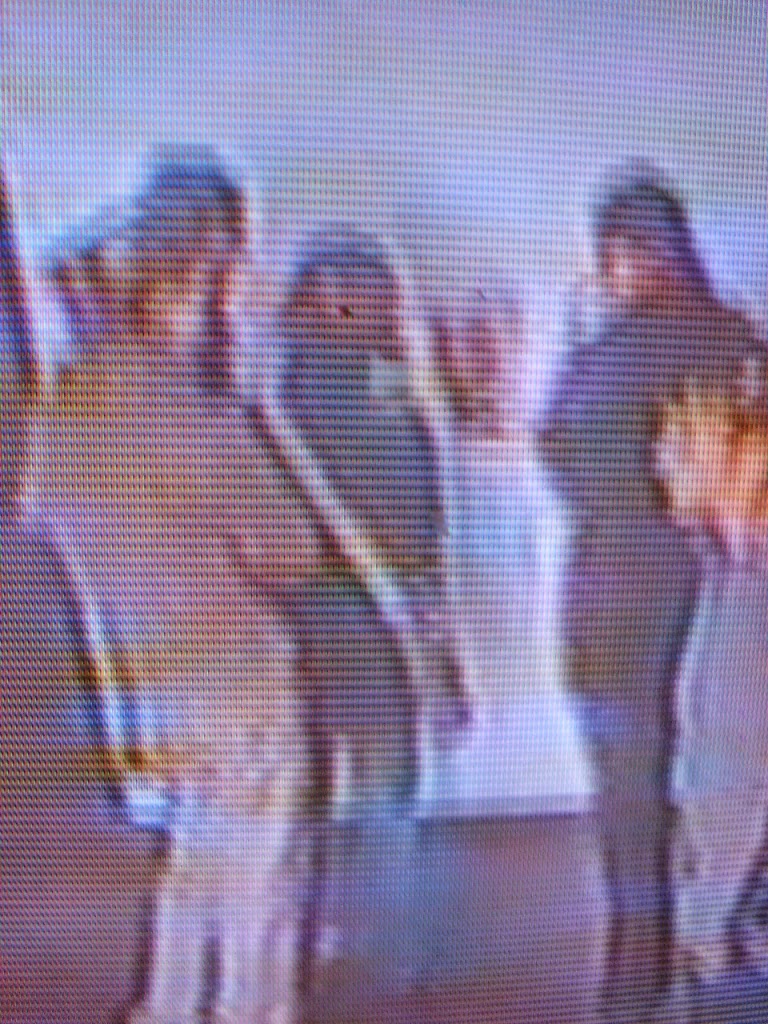 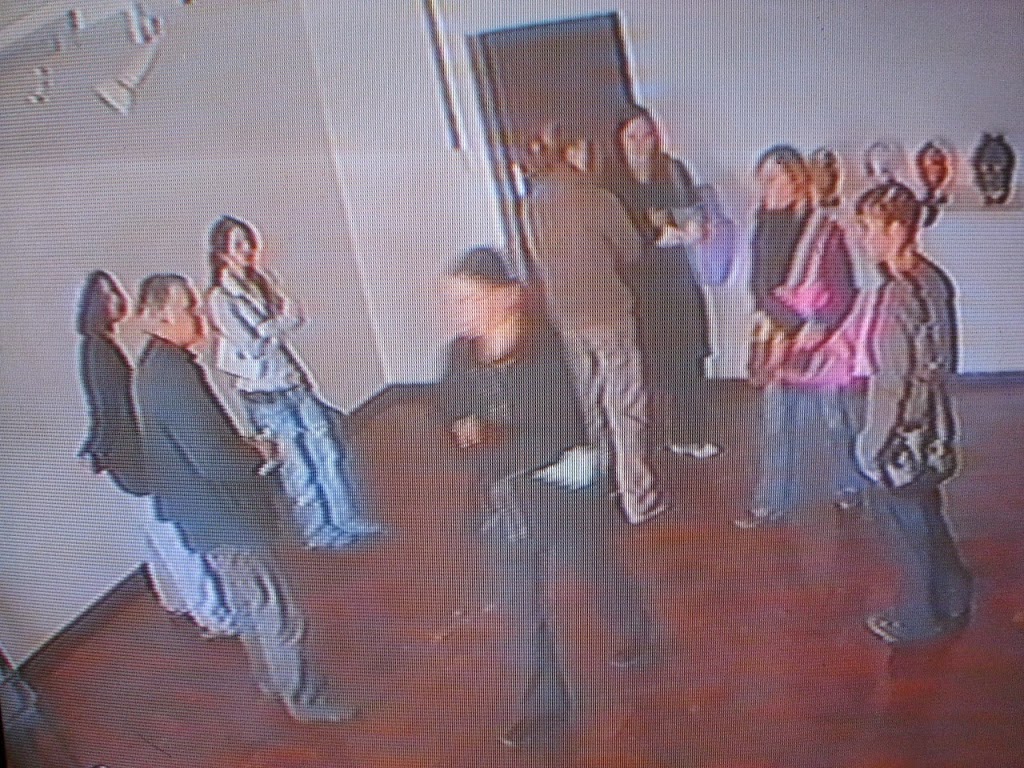 I played the recordings back to the audience inside the office space on this television VHS set up inside. I had to plan carefully and had a looped recording of a performance I did earlier the year in the VHS player initially. I removed it as the lecturers thought the crit/assessment was over, and Marcel brought inside the newly recorded crit/assessment. 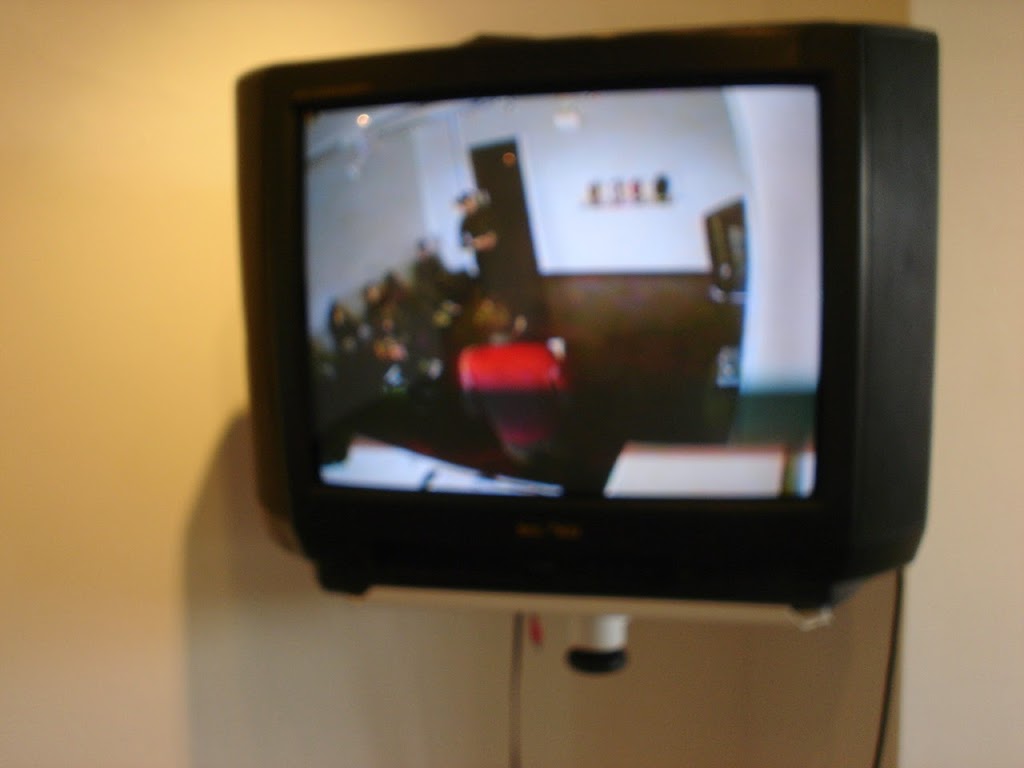 Back to my experience and reason for creating this work:
A large part of studying involves getting one’s work ‘critted’ (criticised) by your lecturers.
In your first and second year of study the lecturers do it with you one on one.

In your third year of study your lecturers involve the entire class, and all the students are required to move from one piers’ work to the next to view their quarterly or annual progress in the form of an exhibition of all the works the particular student created over this time.
This whole exercise is what I just could not stand.

It was not so much me not enjoying my work being criticised, as I just did not like being told what to do. Walking around and looking at every artwork every student in the class has done over a quarter or more of his/her year was not my idea of fun.

I really could also not see how I was going to ‘learn’ how to make ‘better’ art through this or any University instructed/constructed experience of art.What bothered me most about these crits/assesments was that I had no choice in my work being critted/assessed.
I had no choice in who I wanted to crit it.

I had no choice whether I wanted to have it critted/assessed or what selection of work in real life I would be wanting to share with everyone.

I did not even have a choice in who everyone was that was going to see it.
It all was decided for me.

The fact that I was not allowed speaking about my intentions in creating a particular artwork also was shocking to me.

More shocking was the fact that other people were allowed speaking their minds over my artwork!
An artwork I would maybe never even have made if we were not given ‘themes’ or ‘instructions’ as to what should be conceptualised and in what medium.

I realised that art should not be created in such a formal manner in the first place.
That art criticism within an art institution where an art student has limited control over what the concept is that HAS to be explored and what medium HAS to be used has little to no validity.
I realised in that moment that the medium to make this statement would have to be art itself.
In fact, I thought of an artwork to express the above just after leaving the university after a bad crit, waiting for a traffic light to turn green..

The artwork to me is quite Magritte in a way.. Like the painting of a landscape in front front of a window, blocking the view of the very same landscape (critiquing one’s own criticism).
Magritte’s: The Human Condition 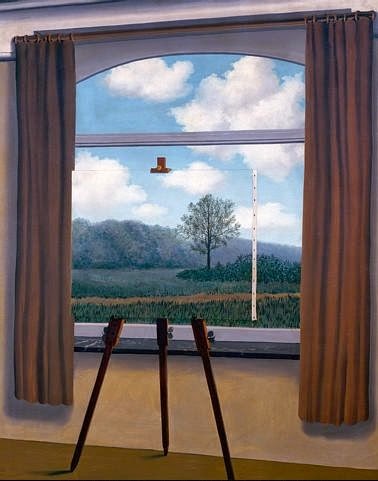 The set-up and planning of the entire ordeal was quite interesting too.
I found Eddy’s Surveillance in Edenvale (the only company willing to do this for me).
I had to drive there, and meet with them.

We agreed that they would set up everything with me and the recorder outside at 4am the morning before the crit/assesment.

I told Eddy to please be discreet.
Despite this four huge men looking like bouncers arrived.
They drove a van with the company name and logo on it!
They carried a ladder and a HUGE drill.
They had to drill a hole through the office wall, and open the alarm sensor.
I am still amazed that it all happened, unseen.. no one suspected a thing.
I guess there is something very not obvious in being obvious.
Like Banksy’s Gorilla with a pink mask show us.

Banksy: Gorilla With a Pink Mask: 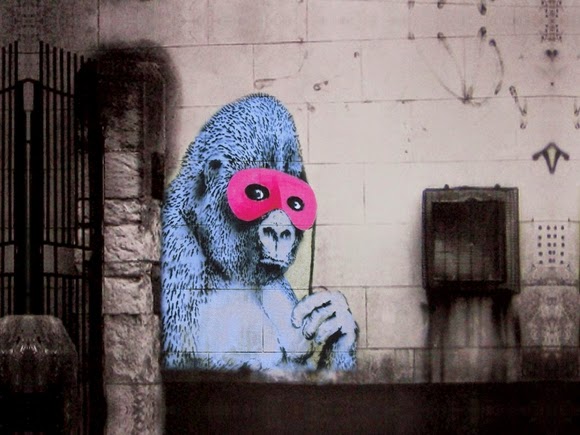